A Juggernaut of Jokes

Where ideas hang out, and do whatever!
Post Reply
541 posts

More diarrhea this morning but (good news?) he just circled around in the guest bathroom so it was mostly spraying and wiping
Top 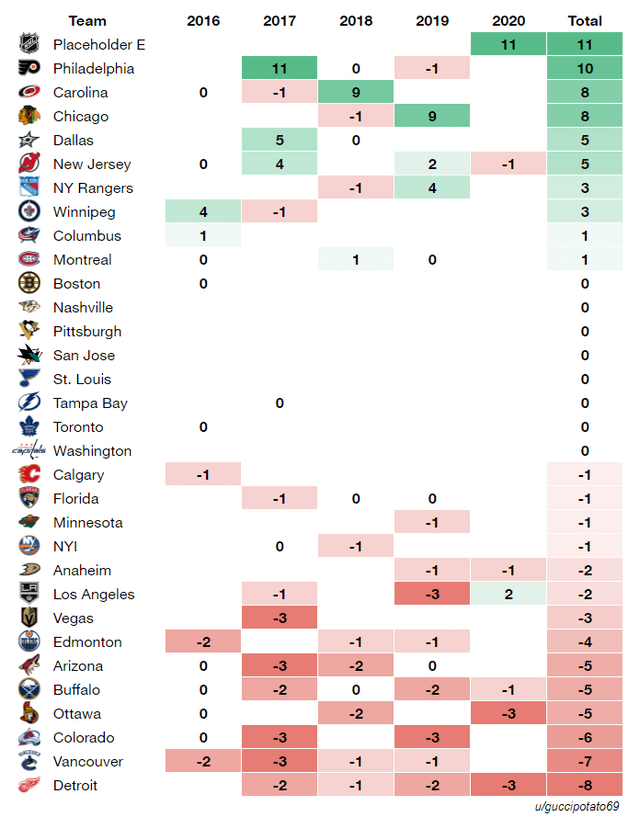 Yeah I tried to see the NBA doing this and could not. The MLB draft this year was probably worse from a Holy Shit the Owners Are Cheap Assholes perspective but at least they're consistent.

The logical thing would've been to hold the lottery for the 7 teams not in any sort of playoff. It gives those fans something to be happy about, because their teams 1. are bad 2. likely won't play till January. Instead they wanted to have TWO LOTTERIES and potentially have the top pick go to a competitive team.

I can't stop myself from looking at Winners and Losers of the Draft Lottery articles and boy it takes some True Analysis to put the Wings in the losers category. Wow, going out on a limb there.

Down Goes Brown can fuck himself for thinking this format's good, though. And no, dude, "The Gold Plan" is also dumb as hell. He's generally likeable but DGB is the most NHL of NHL writers in that his desire to be cute circumvents simple logic.
Top

A certain part of HF Wings (a vocal minority) thinks the team should just trade Larkin and Mantha and Hronek because they're not going to be good in the next 3-4 years anyway.
23-24 Red Wings

I've been diving into the batch of guys from 4-10 or whatever. There are a couple of other names (Lundell comes up occasionally and he sounds super boring!) but I'd be surprised if the Wings don't draft one of these guys, provided that Byfield / Stutzle don't drop or the Wings don't trade back.

Sanderson is the least appealing. The main argument for him over Drysdale from Wings fans seems to be "He's left-handed and we already have right-handed defensemen." You want the best player, morons. He appears to be a good deal better defensively than Drysdale, but is he going to be a guy that scores more than 30 points a season? I don't think you can use a top-four pick on such limited offensive upside.

Four is too early for Askarov. He obviously fits a need and if he fell to the middle of the first round, trading up to get him would make a ton of sense. But he won't. I suppose there's a greater bust chance for a goalie than forward or D, and his WJC was not great, but I still think he becomes an NHL starter.

Holtz seems too one-dimensional. The Red Wings need goal-scorers, too, but they have Zadina and desperately need a facilitator for him, not another version of Zadina.

I just don't know about Marco Rossi. He seems to be a solid all-around player who's a safe bet to be a good pro, but what's his ceiling? I don't think he has a ton of untapped potential. I could see him being a second-line center, but is he going to top out as a first-line forward? It's weird to call a 5'9" player the safe pick, but in some ways he feels like it.

Drysdale is the best defenseman in the draft but I don't think he's going to be a Makar / Hughes tier guy in terms of offensive output. He seems like more of a "smart" D rather than a dynamic one, and yeah, it's tempting to get a D because beyond Seider and Hronek the Wings have a bunch of question marks.

Perfetti and Raymond are the most tempting because they seem to have home-run potential in the way that some of these guys do not. Perfetti could conceivably play center in the NHL, and even if he ends up as a 1A/1B with Larkin, that's pretty good! Great hockey IQ, great at zone entries, can create offense. Raymond didn't log as many minutes last year but I could see him being the forward version of Seider for the Wings; they like what they've seen and feel comfortable projecting his potential.
Top

As a fan of a team that now has a 12.5% chance at the first pick now most likely I'd say this is a welcome development. As a reasonable human though this draft is total bullshit.
Top

Cacophony wrote: ↑
Sun Jun 28, 2020 8:06 pm
As a fan of a team that now has a 12.5% chance at the first pick now most likely I'd say this is a welcome development. As a reasonable human though this draft is total bullshit.

I wouldn’t mind the Wild getting it. They could really use an offensive star.
Top

I realized that I could load the Hockey News draft preview on my iPad (they’re not doing print magazines this summer and I completely forgot about it) and the comparable for Marco Rossi is Nico Hischier. Woof
Top

Here are the sixteen teams and how much (or little) I want them to Laf it up:

The Total Aneurysm Tier
16. Blackhawks: They just moved up -- a lot! -- to get Kirby Dach. The rivalry's still there. I don't like their fanbase. They're on TV too much already. They were supposed to be getting worse but oh look insane lottery luck. Fuck Patrick Kane.
15. PNES: Nope! Don't like it! Not going to think about it!
14. Habs: In the Wings' division, fans are beyond insufferable, French-Canadian star going there would be Too Fucking Much.
13. Leaves: In the Wings' division, but already good. They won the Matthews lottery, they got Tavares in free agency, they don't need another break.

The Lingering Stress Headache Tier
12. Rangers: They just got Kaapo Kakko, they're in the East, I'd have to see Laf on national TV a lot.
11. Flames: They're too good of a team to be gifted Laf, but at least I don't watch many of their games.
10. Panthers: In the Wings' division, feels like they already kill the Wings every time out so what would another star player do, really. Laf would end up being the new Most Underrated Player in the league.
9. Oilers: I know they've won all the lotteries but I enjoy watching them and it would be sick if they had another legitimate forward. I assume seeing the card flip with the Oilers logo would be a bit of cosmic absurdity and then hit me as tragedy like five years later.
8. Canucks: They've also gotten boned with lottery luck and I feel that, but they have Pettersson and Hughes, so it worked out OK on those counts.
7. Shreds: It feels like their ship has sailed, they could really use a top forward, I don't know, do they deserve one, though? Fuck.
6. JERTS: They got Laine second overall, and that Bond villain irritates me. No ill will toward the franchise or the fans but it feels like an unnecessary gift.

The Whatever, Could Have Been Worse Tier
5. Coyotes: I'm tired of the Whoa Taylor Hall Wins the Lottery! narrative but they could really use an exciting forward.
4. Islanders: Barzal would have someone to play with, I guess. I don't care. Who cares. What is hockey, anyway?
3. Hurricanes: They got the good Svech and I'm miffed about that but overall they're a very likable team and fun to watch.
2. Beejs: Someone on Twitter made the case that they Went For It last year and somehow managed to still be decent this year. In the Wings' conference, though.
1. Wild: Team's boring as hell and could use a legitimately exciting player. They rarely play the Wings so I'd mostly be able to forget he exists.
Top

Me So Hronek wrote: ↑
Sun Jun 28, 2020 9:42 pm
I realized that I could load the Hockey News draft preview on my iPad (they’re not doing print magazines this summer and I completely forgot about it) ...

I didn't know this. My son has been wondering why he hasn't received any issues and I kept forgetting to check! Do you know if all print subscribers get digital access too?
Top

The Avs are kind of the best case scenario: Yeah, they got boned, but they won the lottery when MacKinnon was the top prospect and he's a bona fide franchise guy, and their consolation prizes of Makar and Byram look pretty good.

Who knows what the SNES will actually do, but if they get Stutzle / Drysdale or Stutzle / Holtz or Stutzle / Raymond or literally any fucking combination of Stutzle and one of the next five guys, that's an awesome draft.
Top

Yeah like i said, even drafting at 4/5 or 5/6 should have been a home run for the SNES. Getting the remainder of Byfield/Stutzle plus whoever is an incredible boost to their prospects.
Top

Edmonton and Toronto are supposedly the hub cities
Top

Return to “The Care Factory”